skip to main | skip to sidebar

Don't take the lack of posts as lack of activity. In February, we began a transition to a permanent menu, by revising, exanding, and updating the South of the Border and Ghosts of New Orleans exhibits, along with a page of obscure but high-grade "starters." So far only about 30 drinks, but we will continue to update the best of our previous menus and incorporate those into this permanent one. 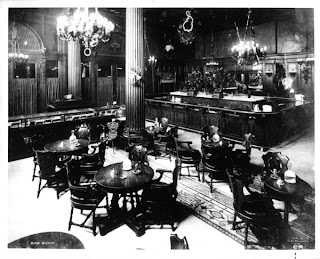 And we're still making new drinks, too. This Sunday we begin an ongoing R&D series dealing with pre-Prohibition Martini variations from the Old Waldorf bar. Every week or two, three pairs of similar variations will pair off head-to-head until we work through the field of nearly 100 drinks, with the best dozen or so earning a spot on our permanent Sunday night menu. Read on for some Martini geekery and the details of our first slate.

Certainly a good number of these drinks lie within the range of what you would get at any bar in the late 19th to early 20th century by simply asking for a dry, sweet, or perfect Martini. They represent the tastes and preferences of particular customers, public figures, employees, or whence they came, and were notable enough to be written down in the barmen’s book.

Given that the proportions of that era were much less austere than today, we experience the Martini in its most youthful, approachable, and changeable state. The increased herbal presence provides a delicate canvas upon which even the slightest variation can have quite the ripple effect, and the dizzying number of variants begins to make some sense.

First principles. A Martini is a drink of gin and vermouth, bitters optional, but more common than not. It cannot include fruit juice or more than a dash of other spirits. Further, there are three types - or conferences, if you prefer:
‘Dry’ – not in the modern sense of “less, or little, dry vermouth,” but simply those mixed with dry vermouth, most commonly in equal parts or a 2:1 ratio.
‘Perfect’ – gin mixed with both dry and red vermouths
‘Red’ – others might say sweet, or wet – gin and red vermouth.

It is best to not think of these divisions as necessarily corresponding to how dry or sweet a drink might be. A dry Martini made with equal parts Old Tom and dry vermouth will be sweeter than a red Martini compounded with London Dry and a small amount of red vermouth. So within each group we make a further division, based upon the type of gin employed: London Dry, Plymouth, or Old Tom.

Posted by Robert Griffin at 3:44 PM

What's happening Sunday nights at The Royale in Saint Louis, home experiments, booziana. Opinions expressed here do not necessarily reflect those of the Royale, its ownership, management, or staff.